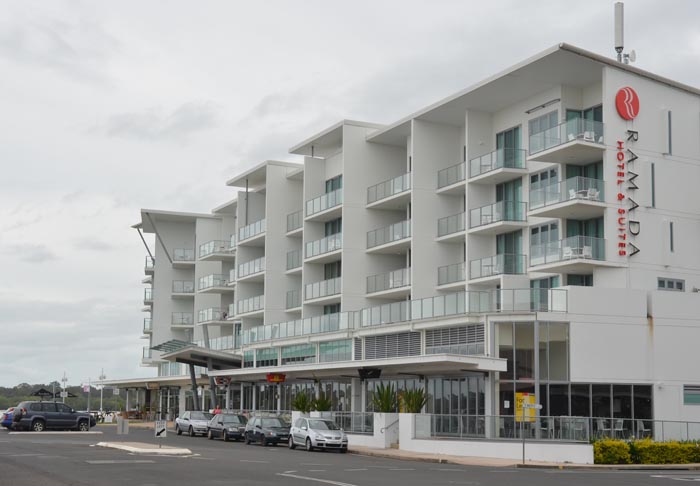 I'd stayed at the Ramada Ballina in 2011 and loved it, so decided to go back for another visit.

Before I get to the hotel, a bit about Ballina...

Ballina is located on the far north New South Wales coast, a touch over two hours drive from Brisbane (190km) and 30km south of its more famous neighbour, Byron Bay. The town's population at the 2006 census was 16,500 (area population 40,000).

As a precursor, my stay at the Ramada Ballina fell on Saturday afternoon/Sunday, which is a pretty quiet time in town. Also, the weather wasn't fabulous. As a result, there weren't a lot of people out and about. This might show in some of the photos and isn't a true representation of Ballina. It's a bustling town.

*All prices and information are as of March, 2012.

I have discovered that this post runs slowly if viewed on Internet Explorer. It's best viewed on Google Chrome or Firefox (not as fast as Chrome).

Whereas Byron Bay is very much a tourist hot-spot and a mecca for travellers of all shapes and sizes, Ballina is not (this, I think, is a good thing). It still has that relaxed country town feel to it. So much so, I was amazed there was a Ramada hotel there. It doesn't seem to be the sort of place where you'd find a 4½ star luxury hotel.

I'd stopped at Ballina while driving to Sydney in 2010 and had breakfast at a place on the river a stone's throw from the Ramada, but had no idea it was there. It was only when I stayed there in 2011 that the penny dropped.

Because the Ballina area has a population of 40,000+, the town has everything you need (should you desire it). There are large shopping centres, supermarkets and the assorted shops, eateries and pubs in town are fine for what you need during a holiday by the sea. There's a cinema complex and the RSL is big, with a capital B. It's beside the river, too, so you get a good view while you're having a beer or meal.

If you fancy a punt, there's a racecourse with a lovely (what looked to be relatively new) stand, and if you're into fishing, there's the river and the ocean.

And very close to the Ramada are the Ballina Naval & Maritime Museum and the Ballina Memorial Olympic Pool & Waterslide. The waterslide is big/tall enough so that you can see it from the hotel, and from quite a bit of Ballina. Also, each Sunday there are the farmer's markets (6am – noon) on Kingsford Smith Avenue a few minutes drive from the hotel.

Ballina is also a good place to use as a base and see what else the surrounding area has to offer. It's a short drive from Byron Bay, Bangalow, Lismore, Murwillumbah and Grafton. It's an hour to Coolangatta and Burleigh Heads, on the southern end of the Gold Coast, and just over an hour to Surfers Paradise and theme parks such as Dreamworld, Wet'n'Wild, Warner Bros. Movie World, Sea World and the Australian Outback Spectacular. And, as mentioned, Brisbane is a little over two hours away to the north and Grafton is a little less to the south.

Staying at the Ramada gives you the best of both worlds – the delights of a 4+ star hotel but with the relaxed atmosphere of a country town by the ocean. And Ballina is right on the ocean. The Ramada sits on the Richmond River and is a 5 minute drive from Ballina's surf beaches. Alternatively it's a 3-4km walk to the surf beaches along a path/walkway beside the river named after one of Ballina's most famous daughters - race walker and world record holder, Kerry Saxby.

The Ramada has a restaurant, The Point, which I will get to later. I also had lunch at Pelican 181, located on the river 300 – 400 metres from the Ramada. This is where I had breakfast when I stopped in Ballina in 2010. This isn't a la carte dining. It's a cafe/bistro on the river. Think 'casual'. Every time I've eaten there (2010, 2011, 2012) the food has been fine. This time around I had the fish of the day – mahi mahi on Thai salad with roasted potato. It was delicious and around the $20 mark.

I have also eaten at Malibu Burger on the main street (once again, a few hundred metres from the Ramada) and the burgers were sensational. Everything about the meal was fresh and I remember finishing and thinking 'wow!', which isn't always the case after a burger. I actually felt like I'd eaten something healthy.

Getting to Ballina doesn't need to be by road only. Virgin, JetStar and Rex all fly into Ballina Airport which, considering the size of Ballina, is big...but that's because it services a large area. I stopped off to get a photo of the airport terminal and was amazed when we drove past the rent-a-car area. In relation to the size of the airport, it's disproportionally large and evidence that the airport services more than the town.

Ballina links you may find useful -

The Ramada is ideally located right on the Richmond River and a few hundred metres from the town centre. The Kerry Saxby walkway that runs by the hotel is a popular way of getting about throughout the day but especially so in the early morning and late afternoon, when the joggers/walkers 'hit the pavement'.

If you'd like to know how to turn your images into visual stories, I've published a book that takes a whole new slant on photography and 'translates' the art of taking photos into a language we all understand.

To read more about my book and see some of its 100+ visual examples, please click HERE.

***I use all the tips and hints from my book in every photo I take, including those in Travel With Giulio.

The hotel is low set and doesn't impede on the Ballina skyline, which is nice. It's located on Martin Street, which runs off one end of River Street, the main street, and parking while you check in isn't a problem. It does have its own under-cover car park, availabe to guests free of charge.

A standard room starts at around $150/night and goes up to around $450/night for a two bedroom penthouse (prices differ according to peak/off-peak season).

The room was a Hotel Spa Room - around $150/night (March 2012). A check of the Ramada Ballina website shows that the price will be increasing to $180/night from April 2012 onward. Hotel Spa Rooms feature a courtyard or private balcony and waterfront views. They are dual key and adjoin One Bedroom Suites to expand if required.

The room was what you'd expect from a 4+ star hotel - looked great,  spacious, comfortable and clean. It was on the 6th floor and had a spectacular view up the river towards the ocean.


The 'open' bathroom – photo below – was a novelty but if this isn't your thing, then you can close the shutters and have some privacy. The bathroom itself was big and the shower sensational (shower head the width of a dinner plate!). It was also very clean – always nice in a hotel bathroom – and there were some assorted goodies (shower gel etc).

For all those (blokes?) whose first task is to check out the TV stations when they get into a hotel room:

There are in-house movies available to buy through your TV at $15.95.

Alternatively, if TV isn't your thing, then how about a good book? Perhaps one - or more - of my three books? Have a look and see which you might like.

The Point Bar & Restaurant is in the Ramada but not part of the Ramada, although you wouldn't know this. As you walk into the foyer it's off to the left and there's nothing 'separate' about it.

I've dined there several times, for breakfast and dinner mainly, and the food is always good (better than good). It's very 'open plan' and you can easily wander from the bar through to the restaurant.

The thing I like about The Point is that, even though it's in a 4+ star hotel, there's a relaxed feel to it. This may be partly due to the fact that it opens straight out onto a large outdoor terraced area that is right next to the riverside walkway and grassed area. The decor is light in colour and there's plenty of fresh air and natural light, so you don't feel 'boxed in'.

I haven't tried every restaurant in Ballina but it's safe to say that The Point is up near the top of the tree when it comes to dining. Because it's not exclusive to the Ramada it does get busy and, even if you are staying at the hotel, it's still an idea to book – especially on the weekend.

The bar has a good selection of wines, spirits, beers and cocktails and the night we stayed we had a couple of drinks at the bar and then wandered through to the restaurant.

The one thing I found slightly unusual was the bar closed at 10pm on the Saturday night I was there. Admittedly there are plenty of other pubs close by but The Point bar has far nicer decor and it's much closer to the rooms upstairs than any of the pubs (once again, a reminder that the Point Bar & Restaurant is separate to the Ramada, even though it's on the premises).

The following morning I wandered down for breakfast. It was quiet – breakfast isn't advertised on The Point's website and is more for hotel guests – and the staff were cheery, but not over-bearing. Always good for a Sunday morning.

The menu is quite simple but covers all bases. I ordered a fresh aple juice (squeezed there and then) and the Eggs Benedict with ham ($16). It arrived...it disappeared. A good indication there was nothing wrong with it.

Some other breakfast items on the menu:

Some of the sides:

Outside the front of the hotel and within the Ramada 'complex' is an Indian restaurant, Mumtaj Indian. There was also an Italian restaurant next to Mumtaj but that space was For Let when I was there.

The room service menu is exactly the same as The Point restaurant menu, with prices to match and a $5 delivery fee.

The one and only bar in the Ramada is the one attached to The Point, as discussed above. Bar menu here.

Finishing this review of the Ballina Ramada with the laundry isn't quite what I'd intended but that's the way it's panned out. Laundry is important but it isn't 'upbeat'.

In closing, the Ramada Ballina is a 4+ star hotel but in a relaxed sort of a way. It is what it is - a luxury hotel in a town by the sea. That should be taken into account if you're expecting a city 4+ star hotel equivalent with an in-house laundry service, late night bars, fully equipped gym, hotel corridors that don't have the potential to be open to the elements, or silver service dining.

You've been 'warned', so please don't roll up and throw a tantrum if it doesn't have all of the above. I witnessed one guest doing this and their noise pollution intruded on everyone else's lovely break from 'normality'. What you will get is good food in relaxed surroundings, friendly staff, lovely accommodation and, most importantly, a relaxing holiday by the ocean.

Enjoy your stay at the Ballina Ramada!

*If you stayed at the Ballina Ramada as a result of this post, please tell me - TravelWithGiulio@gmail.com

Photos & text by Giulio Saggin (unless otherwise stated)
© Use of photos/text must be via written permission
TravelWithGiulio@gmail.com